Origin of name Tambaba: from Tupi Guarani "inside the rocks". Distant about 40 km from the tourist center of João Pessoa, Beach Tambaba is the seventh Beach of Costa do Conde.

Tambaba is being the one that arouses the curiosity of the visitors since it was the first beach officially naturist northeastern Brazil: a municipal decree of January 1991, authorizes the practice of naturism on site.

The Paraiba beach is considered as one of the twenty most beautiful in Brazil. Naturism in Tambaba is managed by the "Association Tambaba Naked" which is responsible to organize the ethical rules of conduct as a means of ensuring a pattern of behavior on the beach.

Between August and October, it is also common to find surfers who find there the possibility of nude surfing. There is even a school dedicated to this activity there.

Photos of the cliffs of APA Tambaba 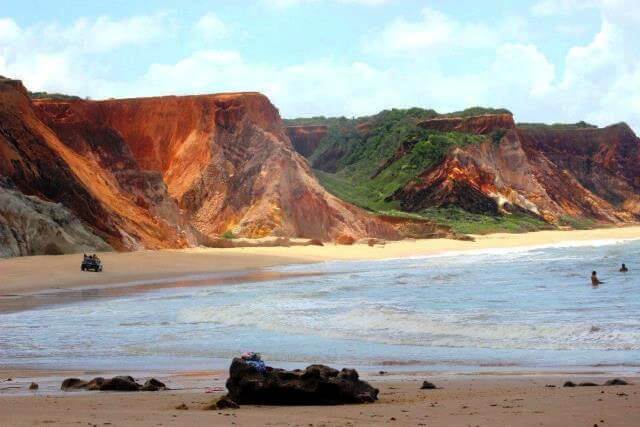 Already on arrival at the beach, the visitor is surprised by a viewpoint: the view of Arapuca beach is breathtaking and has already become one of the main postcards of Costa do Conde.

A huge and colorful cliffs contrasts with the local vegetation and the sea - the result is worthy of a watercolor. The visitor, arriving at the beach encounter a sand stretch where the use of clothing is mandatory.

The beauty of Tambaba is already represented in those meters paradise as it has natural pools formed at low tide and has the coconut tree symbol of the beach that grows on top of a rock. 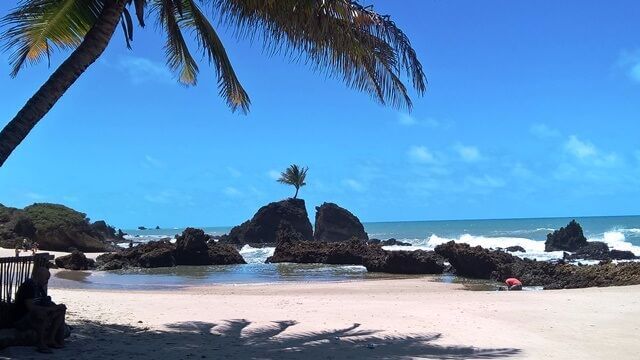 In the next cove, however, nudity is mandatory: The visitor receives instructions from the beach, goes through a staircase and from this point, enjoys nature in the freedom that allows full nudity.

Within the naturist area, small coves formed by rocks and cliffs divide the landscape with the characteristic warm sea of the area. The scenario is consistent with the adjective that most tourists use to describe the beach: heavenly!

Within the naturist area, the tourist will find a bar and an inn that follow this philosophy. Outside this range, Tambaba offers camping, hostels and restaurants, most seafood.

In addition to the naturist area, also belongs to Tambaba beaches Arapuca and Marcelia, which are further north and are not naturists: in Arapuca, surfers, locals and visitors encounters waves and charming look.

The small beach of Marcelia is a guarded pearl in Tambaba, it is a little hideaway between the waves of Arapuca and the naturist territory.

This beach also holds part of the mysteries and legends of the place: the stone reminds everyone that the place is sacred. Tambaba still holds many surprises to its visitors.

In the remaining area of Atlantic Forest, which is guarded by an Environmental Protection Area (APA), it’s possible to do nature walks.

In this way, the tourist can go through closed tracks, for lookouts, mangroves, sandy beach stretches where rivers encounters with the sea and is more an endless example of the stunning nature of the Conde Coast. 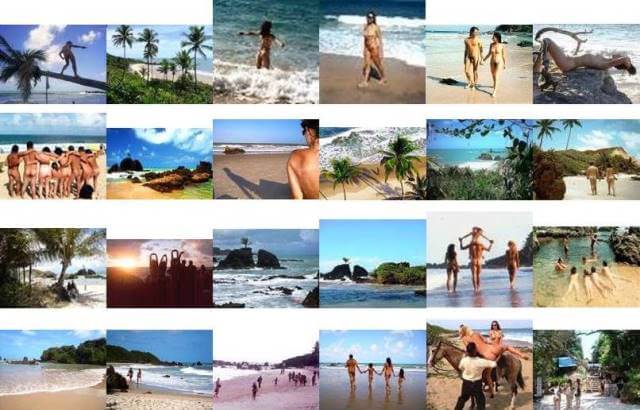 After World War naturism began to spread, not only in Europe but also in the United States. Today few countries do not have naturism fans.

According to the Brazilian Naturist Federation, naturism is "a way of life in harmony with nature, characterized by the practice of social nudity, which is intended to encourage self-respect, respect for others and care for the environment".

The Environmental Protection Area (APA) Tambaba was created on 25/03/2002 and today encompasses 11,320 hectares, situated on the southern coast of Paraíba in the municipalities of Conde, Alhambra and Pitimbú. The beaches inserted are Tabatinga, Coqueirinho, Tambaba, Graú and Bela beach.

The PAC Tambaba aims to "ensure the integrity of terrestrial and aquatic ecosystems, protect watercourses, improve the quality of life of the population and regulate the occupation of the area, thereby contributing to the reduction of local environmental degradation". 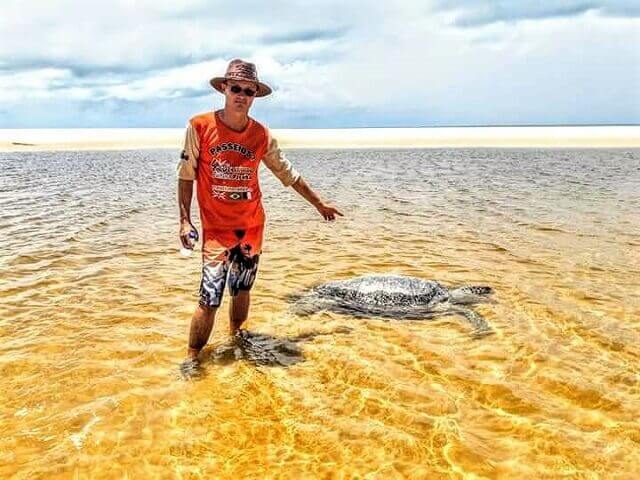 Leisure activities, tourism and agriculture characterize the current use of the area. The beaches of Tambaba, Tabatinga and Coqueirinho, are being occupied in recent years with buildings of summer houses, bars and inns.

The paving of the road PB-008, Jacumã-Tambaba stretch, has accelerated the process of occupation and attracted significant tourism developments in the region.

A survey proves threats to flora of APA Tambaba: the study found that the environmental protection area located in the South Coast of Paraiba, one of the few remnants of Atlantic Forest in the state, is rich in woody species.

It was also noted that due to the disorderly occupation of the coastal strip of Paraiba, the situation of that reserve is critical, threatening even the headwaters of some rivers.