We only do this tour together with the Zoo Botanic park and the Sunset.

PHOTOS of the Historic center

Tour in the historic center of João Pessoa, the third oldest city. The city is green and quiet, with reasonable prices.

We only do this tour together with the Zoo-botanical Park and the Sunset.

The historic Center of João Pessoa

DETAILED DESCRIPTION of the historic center

Third oldest city in Brazil and one of the greenest and quietest cities, the historic center of João Pessoa is very well preserved.

The main attraction is the ensemble St Francisco, real treasure of art and architecture.

Modern Legislature contrast to the former palace of the Redemption, the Court of Justice, and the Faculty of Law, of classic architecture.

What to do in the historic center of João Pessoa

If you like architecture, art or history, you can not miss a visit to the historic center of João Pessoa, third oldest city in the country.

Second richest region in the past, the Northeast has attracted the most famous artists, and this is reflected in the art and architecture.

Historic monuments like the ensemble St. Francisco and the Church of São Frei Pedro Gonçalves reflect the tropical baroque architecture and colonial style. 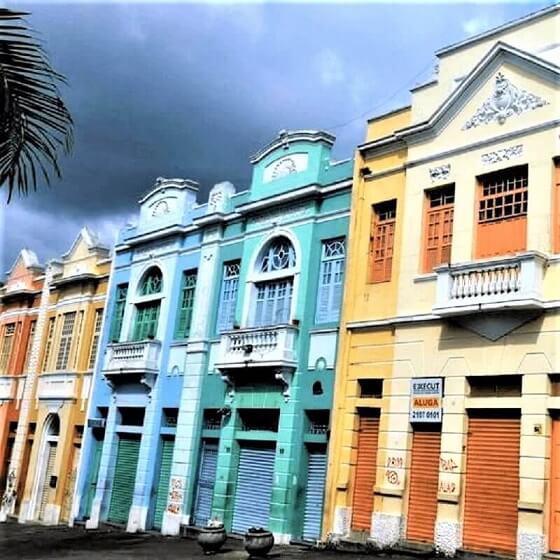 These buildings are filled with pieces of art.

The high city offers an unforgettable view of the forest and the river Paraíba... that looks like a vision of the past.

From the Globo hotel window you can watch the most beautiful sunset: it's a true delight!

On the square João Pessoa, called the square of the three powers, many historical and political events took place.

The tropical Baroque style is typical of the region and includes in the works representations of the fruits of the region. We also have the colonial style, Art Deco, Rococo and Eclectic.

MAP OF THE historic CENTER of João Pessoa 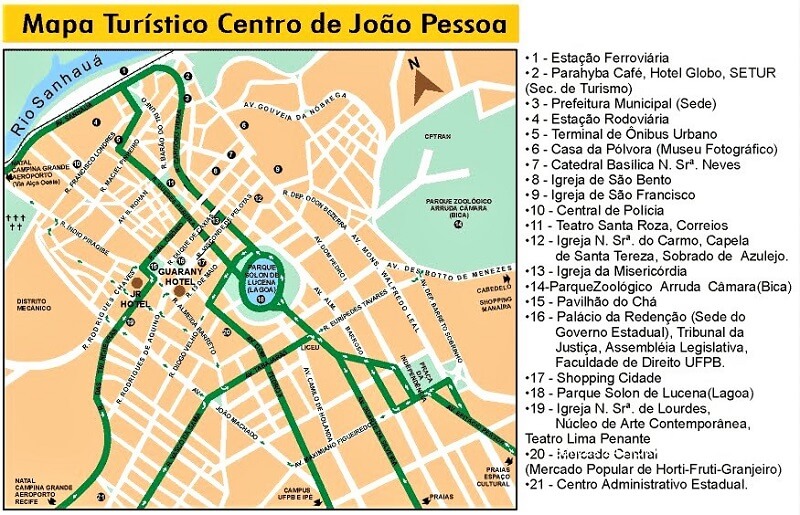 History of the creation of the city

The historic center of Joao Pessoa is located on a tributary of the Paraiba river and not at sea side, because of a great reef barrier front of the coast.

When the Portuguese arrived with their ships loaded, this reef prevented from reaching the ground; the only possible passage was by the Paraíba river.

At the entrance of the river there is a old lighthouse built at the end of coral reefs to indicate the path to the ships.

This reef has three highest points, which are: Areia Vermelha, Picãozinho and the natural pools of Seixas. At that time, there were no roads and the river was the only entrance to the city.

For the defense, it had a fortress on either side of the river entrance: fort Santa Catarina side Cabedelo, and fort Santo-Antonio side Lucena.

On the island of Restinga, in the middle of the river, there was a gun battery. The fortress side of Lucena has gone. It probably sank in own weight.